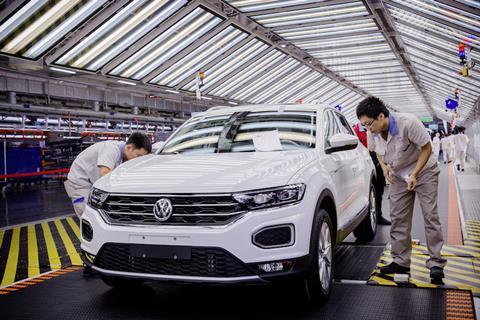 Continued disruption to the automotive supply chain caused by the coronavirus outbreak in China is leading many carmakers to extend plant closures by two weeks beyond the average ten days allocated for closure over the Chinese New Year holiday. Ongoing supply chain problems are now also threatening to hit manufacturing around the globe.

As reported last week, restrictions on supply routes are growing by the day as the virus spreads, both domestically and internationally, across all transport modes. Since then more carmakers in China have prolonged plant closures and have said that assembly beyond February 17 will depend on secure inbound supply.

Disruption is a threat to China’s overall automotive market. Market analyst, LMC Automotive, said if the epidemic damaged consumer confidence and delayed purchasing over the first two quarters of this year, China’s GDP growth rate would drop towards 5% for 2020, with the vehicle market falling by between 3-5%.

“This is a very fluid situation and one that warrants heightened attention as it has the potential to significantly reduce Chinese automotive production in 2020,” said Jeff Schuster, president, Americas Operations and Global Vehicle Forecasts, LMC Automotive.

VW exposed
Volkswagen Group has a strong presence in China and any delay to production will have a big impact. The carmaker has 3,000+ dealer and service outlets across the country and last year it delivered 4.2m vehicles, accounting for more than half of its overall global sales in 2019 (6.2m). VW brand accounted for 3.16m deliveries in China and there was a strong showing from Audi at almost 700,000-unit sales; this despite an overall decline in China’s passenger car market.

VW has around 20 production locations for vehicle assembly, engine and parts manufacturing in China with local partners SAIC and FAW. That includes five assembly plants. It made 4.03m vehicles in China last year (and imported 193,600) but is now facing a production shortfall of roughly 150,000 for every additional week car assembly is delayed.

VW Group China told Automotive Logistics that its joint ventures in China had updated production schedules and were working hard to get normal production processes back up and running. However, it said it was facing challenges because of delays to the restart of supply chain operations after the Chinese New Year holiday, and the limited travel options for workers, both of which have been caused by the coronavirus.

“Both the joint ventures expect to resume production at all their plants by the beginning of next week (Feb 17) at the latest,” said a spokesperson for VW Group China. “The production feasibility of each plant is checked individually, leading to different starting times in the coming days. While each of the FAW-Volkswagen factories plans to resume individually within the week, most SAIC Volkswagen plants will start again by February 17.”

VW is asking workers in the most affected regions in China to observe a two-week self-quarantine period before returning to their workplaces, suggesting that numbers could be down throughout February.

VW’s global supply chain is unaffected as there is no serial export of components produced in China to other markets and production in China is not reliant on just-in-time delivery of components from other countries. That is not the case for other carmakers, however.

Government guidelines
Toyota said it would not start production at its four vehicle assembly plants in China until February 17, though it said some personnel would return to work from February 10 to prepare for the production restart. Team members in non-plant divisions of the company are also returning from the beginning of this week subject to local government guidelines.

“After considering various factors, including guidelines from local and regional governments, parts supply, and logistics, we are treating the week starting from Feb 10 as a period for our teams to prepare for the return to normal operation from next week and beyond,” said a spokesperson for the carmaker. He added production beyond February 17 depended on the particular plant and the supply of parts to it, something that again was subject to guidelines from local and region governments when it came down to logistics.

BMW’s joint venture in China – BMW Brilliance Automotive – also said following government guidelines was a priority for the health of its employees and it required staff to strictly follow measures issued by government authorities.

Like other carmakers, BMW has extended the shutdown of its two assembly plants and high voltage battery centre by two weeks and currently plans to restart production on February 17. At the moment the joint venture makes six BMW models – BMW 1- 3- and 5 Series, and the BMW X1, X2 and X3 – for the domestic market.

“In China, our purchasing, production and sales experts are closely monitoring the situation regarding parts supply, production and vehicle delivery to customers in China,” a BMW spokesperson said. “Thanks to our flexible production system, we will be able to react to further developments at short notice.”

Assembly beyond China is now starting to be affected, with Renault reported to have shutdown its Busan plant in South Korea for four days this week, while its partner Nissan shuts its plant in Kyushu, Japan. A parts shortage has also forced GM Korea to halt production.

Meanwhile, Fiat Chrysler Automobiles (FCA) said it was continuing to monitor its global supply chain, but said there was no immediate impact on the group.

Toyota said it was still investigating the impact on global operations that sourced parts from China. The supply of engines and parts from Toyota facilities in China effects plants in Japan, but the spokesperson said that so far there has been no impact and production is running normally this week in both Japan and Europe.

BMW said that outside of China purchasing experts were monitoring the situation but there was currently no impact on the security of supply.

However, while production in overseas markets may not yet be affected, according to logistics software developer, Llamasoft, the shutdowns in China mean depleted stocks of parts will impact production elsewhere.

“The shutdown of operations in Wuhan and Hubei is impacting not only production in China but major suppliers for production of component parts for new vehicles around the world,” said Slimane Allab, senior vice-president and general manager, EMEA at Llamasoft. “Most carmakers single source components for new vehicles and China is a major supplier of those – leading to increased risk of global supply chain disruption.”

Allab said that inventory quantities put aside to cover the holiday shutdown were based on fixed closure times, but with quarantine laws in full effect many plants could expect to remain closed longer than anticipated, leading to eventual stock shortages.